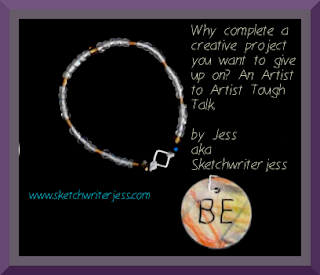 
I don’t know about you, who create art and craft, and/or pursue other creative outlets, but I have projects that get stuck in my head that won’t go away. Novels I sort of completed or abandoned completely, Crochet and Knit Projects I started to design, but couldn’t finish, and Jewelry pieces I made a couple of, but never followed through in making more.

It all adds up and festers and gnaws at my stomach and chatters in the back of my mind. “It” being the projects I start, but don’t finish.

It doesn’t matter, that I have completed short stories and had them published in literary magazines, Or that I designed and published two patterns that I crocheted and had one sell in a yarn shop for awhile, or that I’ve made jewelry, entered the jewelry in a juried show, not only got in, but made a sale, plus one sale to a dear family member who is one of my biggest supporters.

All that didn’t matter. I used to say things like, “Oh I sold that to my _____, it doesn’t really count.”, “I need to get the right people to buy my work.”, “Why can’t I get ahead in the art world?”, ( and yes I’ve even had art I entered into shows and got juried, and still it wasn’t enough), and my personal favorite, “What is the point of making art and craft?”

I had tried to figure it out as best as I could and it never got me to where I was satisfied with my life. I kept feeling like I had to be happy 24/7. If I wasn’t happy, I wasn’t doing it right.

Well friends, I hate to break it too you, but life is not life without ups, downs, and boredom. Plus there are a few highs and lows thrown in just to make it interesting.


I started a project holiday season of 2016, in an attempt to make something that I could use that I would like and thought other people would like as well. Not only did I do that, but I followed other people’s advice on how many I should make, what colors I should use, and how I should produce them. It worked for awhile, and then, I just didn’t want to follow the advice anymore. I wanted to share my true voice, I didn’t want to speak like someone else and hide my vision from my friends, family, and people who read what I write and look at what I draw.

Not only that, there were some technical issues I had with the Charmed “Be” Bracelets. The kinds of things that I pick at, that others may not even know about or care about.

This is where I started questioning what the point of creating art and craft was again. Why am I doing this again. It drove me nuts last time? It drives me crazy often.


I have my own answers to this question and I would be remiss to not mention that I have a workbook I’m making so that if people choose to, they can make it a little more comfortable to think and get frustrated on paper about their creative process. It’s similar to the other e-book I have written, yet it has it’s own flavor.

I’ve finished my Charmed “Be” Series of bracelets. There is one type I am partial too and will concentrate on it whether people want a certain style or not. Why?

I searched and came up with my own answers based on what I took and left of what other people in the blogging community say about business, life, and creativity, in my effort to prevent future long blocks of time where I don’t create something or finish a project. The internet is not a game for me. It is the way I choose to make my living and it is just as valid as any other way to do so.

Take what I say with a grain of sand. It’s sharp and soft, and perhaps may even provide some warmth and comfort in these uncertain times.

If you want to read more about the process of how this bracelet is made, here are links to the series about the Charmed Be Bracelet of 2017:


Why now is the best time to make a bookmark bracelet...Now where did I put that bookmark?