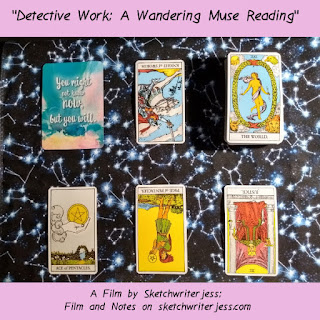 I’ve used a spread formerly named the Divine Inspiration Tarot Spread; however I felt that sounded to biblical, so I decided to call it the Wandering Muse Spread Instead. Since the original Spread was inspired by creativity, I felt that was the best new name for it.

The spread contains four cards plus one bottom of the deck card and one oracle card. The first row of cards contains a past, present, and future. The other two cards represent the soul path of the person and the theme of their life. The oracle card ties everything together. This spread makes a great character study exercise for writing fiction.

With Justice reversed for the past of the character, keywords and phrases are excessive force, and detective.

With the Page of Pentacles reversed for the present of the character, key phrases are unfavorable news and wasting time.

With the Ace of Pentacles for the future of the character, a key phrase is speedy intelligence.

With the soul of the character being the Knight of Swords reversed, keywords and phrases are lack of strength, and lack of power.

With the theme of his life being The World the key phrase is change of place.

For the Oracle, “You might not know now but you will.”, the key phrase is think of someone you love and love them as you love yourself and as God loves you.

He is a detective who uses excessive force in his work. He gets into some fights as a result.

There’s some bad news. He spent time fighting with the wrong suspect.

Somehow word got around of what happened and someone on the force took his strength and power from him.

He uses power against those who are weak and now it’s catching up with him.

He wants to escape.

The only way he can is if he acknowledges his part in victimizing people who weren’t suspects and begins a path to make what’s wrong, right by the force.

As you can see this spread an easy yet insightful way to come up with characters for a novel or short story.

Until next time, see ya’ on the small screen.

Be sure to like and share my videos if you find them helpful. And if you want to see more of my content, some of which is only on my channel, Subscribe to see more of what I got.